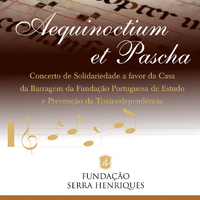 Under the protocol celebrated with the Portuguese Foundation for Drug Prevention, the Serra Henriques Foundation supported a concert for solidarity with the Choir of the Ministry of Education (Educantare) at the Gil Vicente Theatre, in partnership with Santa Casa de Misericórdia of Cascais.

The Educantare choir is the result of the will of a group of people with diverse professional activities connected to Education - managers, professors, inspectors, administrative staff, graduate staff, technical assistants and operational assistants - interested in singing together, trying to let themselves absorb and transmit the various involvements Music allows for.

The proceeds from the box office reverted to Casa da Barragem (Private Social Solidarity Institution) that is dedicated to mental health and the prevention, treatment and reintegration of those affected by drugs and alcohol. Casa da Barragem was founded in 1986 by Santa Casa de Misericórdia of Cascais and, since its creation, has assumed the social responsibility of complementing the existing public solutions for the drug problem.